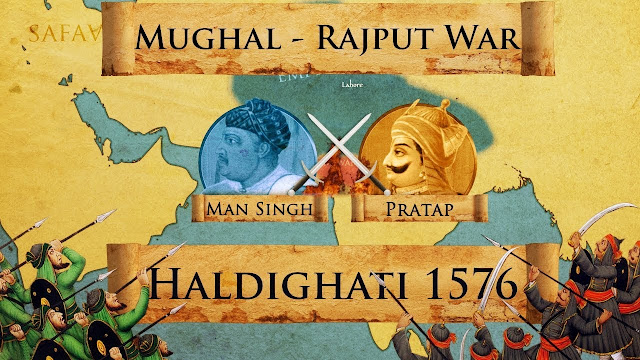 The historic Battle of Haldighati, took place in the year 1576 AD between Rana Pratap Singh, the great Hindu Rajput ruler of Mewar in Rajasthan and Raja Man Singh of Amber, the great general of the Mughal Emperor Akbar. This battle is considered as one of the most significant events in the history of the Rajputs, and this battle was also one of the shortest battles in Indian history, which lasted for only 4 hours. Today, the Haldighati pass, in which the battle took place, stands as a tourist spot, with great memoirs of Raja Rana Pratap Singh and his brave horse Chetak. 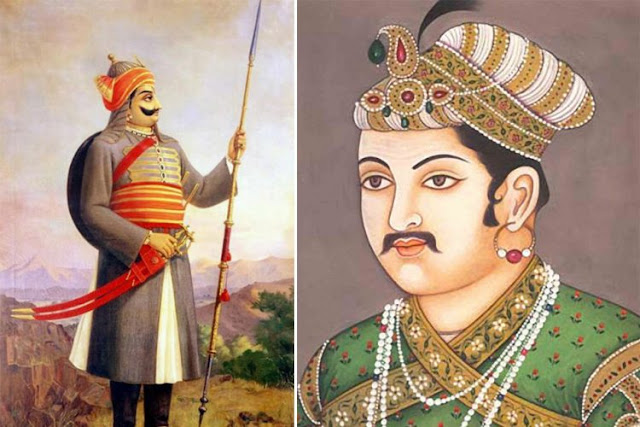 The reasons that led to the battle

Maharana Pratap or Pratap Singh, belonging to the Sisodia clan of Rajputs, became the ruler of Mewar in Rajasthan in 1572. In the meantime, by mid-1500s, the Mughal Emperor Akbar, due to his desire to rule all over India, continued his conquests of several Rajput kingdoms such as Chittor, Ranthambore and others. In fact, nearly all Rajput kingdoms had surrendered to Akbar and his rule, except Mewar. This was the only Rajput kingdom, under the able leadership of Rana Pratap, which was not willing to compromise on its independence. After waiting for almost 3 years for Mewar ruler’s submission, Akbar sent his general Raja Man Singh of Amber to have talks on peace treaties and persuade Rana Pratap Singh to submit. However, Rana Pratap agreed to sign the treaty on his own terms and conditions. His condition was that he would not come under or tolerate the leadership of any ruler, especially the foreigners.

The strength of warring forces

Historians say that Man Singh, who had a command of more than a 5000-strong army, moved towards Mewar. Akbar felt that Rana Pratap won’t be able to fight the large Mughal army, as he did not have the experience, resources, men and allies. But, Akbar was wrong. A small army of the Bhils tribe, the Tanwars of Gwalior, the Rathores of Merta joined the battle against the Mughals. Rana Pratap also had a group of Afghan warriors, led by a commander, Hakim Khan Sur who joined him in the battle. These were the many small Hindu and Muslim kingdoms which were under the rule of Rana Pratap. All of them wanted to defeat the Mughals. The Mughal forces, no doubt, were a larger army, which vastly outnumbered the Rajputs (3000 cavalries, as per the accounts of the Mughals).
The aftermath of the battle: winner and loser
On 21 June 1576, the forces of Rana Pratap and Akbar met at Haldighati pass. Akbar’s army was led by Man Singh. It was a fierce battle; both the forces put up a brave fight. Mughals were in fact taken aback by surprise by the attacks from Rana Pratap’s men. Many Mughals fled away without fighting. The Mewar army attacked the Mughal army in three parallel divisions. Realising the failure of the Mughals, Man Singh moved forward to the centre with full vigour to attack Rana Pratap, who at that time was commanding the centre of his small army. By this time, the Mewar army had lost their momentum. Slowly, the Mewar soldiers started falling. Maharana Pratap on his horse Chetak kept on fighting against Man Singh. But, Rana Pratap was heavily wounded by the continuous hit of the spear and arrows by Man Singh and his men. During this time, his aide, Maan Singh Jhala took the silver chatter from Pratap’s back and placed it in his back. Wounded Rana Pratap fled away from the Mughal army and was saved by his brother Sakta. Man Singh in the meantime killed Maan Singh Jhala thinking him to be Rana Pratap. He was taken aback when he came to know that he had actually killed one of Rana Pratap’s trusted men. Next morning, when he came back again to attack the Mewar army, no one was there to fight the Mughals.
Even today, the battle’s result is considered indecisive or it can be considered as a temporary victory for the Mughals. The battle was “a glorious defeat” for Mewar.
The larger implications of the battle
The battle of Haldighati was significant for the valour displayed by the Rajputs and the small tribe Bhils. Rana Pratap set an example of courage and bravery in the Haldighati battle. It was a turning point for the Mughals as well. It was a fierce battle and both the sides showed strong repulsions. The result was indecisive. But, even today, the battle is considered as a true symbol of courage, sacrifice, and loyalty of the Rajputs to save their motherland.
The overall place and significance of the battle in Indian history 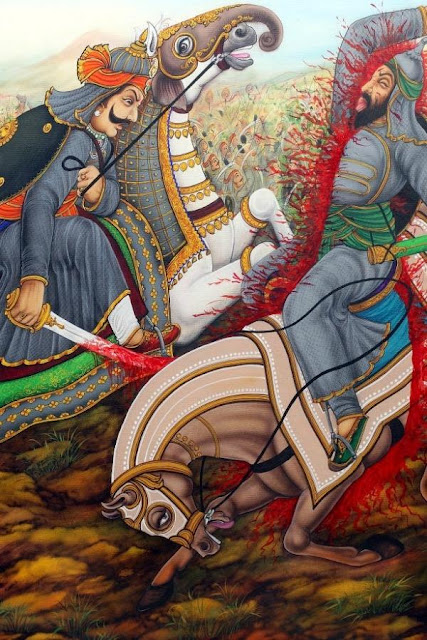 It is said that after the battle of Haldighat, Rana Pratap kept on attacking the Mughals, in what is termed as the techniques of guerrilla warfare. He stayed in the hills and from there, troubled the large Mughal forces in their campsites. He made sure that the Mughal troops in Mewar would never live in peace. Three more expeditions were carried out by Akbar’s army to beat Pratap out of his hideouts in the mountains, but they all failed. During the same time, Rana Pratap received financial assistance from a well-wisher called Bhamashah. The Bhil tribals provided support to Pratap with their expertise in living in the forests. His innovative strategy for warfare using scorched earth, evacuation of people in the areas in which the enemy marched, poisoning of wells, use of mountain forts and caves in Aravallis, continuous looting, plundering and demolition of the enemy camps helped him recapture much of the lost territories of Mewar. He also freed many areas of Rajasthan from the Mughal rule. The years passed and in 1597, Pratap died of injuries in a hunting accident. He made his son Amar Singh his successor.