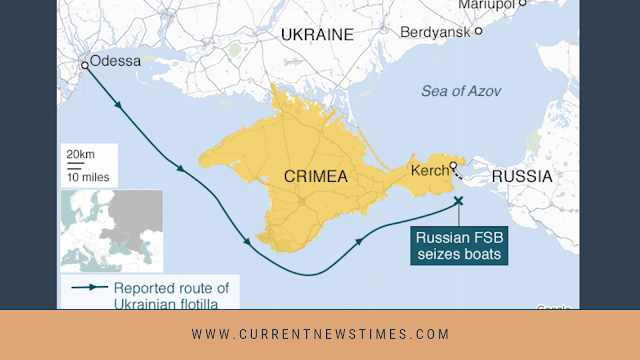 1)On Sunday, the Ukranian Navy accused Russian forces of opening fire on three

of its ships near the Kerch Strait, causing damage and injuring six crewmembers.
In a statement, Russia’s Federal Security Service confirmed that Russian units captured the three vessels, and said that Russian forces are providing medical assistance to three Ukrainian sailors who were injured in the exchange.
2)Ukrainian President Petro Poroshenko held an emergency Cabinet meeting and was
in contact with the European Union and NATO over possible additional sanctions for what

he called “criminal acts.” He instructed the Foreign Ministry to inform the Group of Seven and

the United Nations Security Council of what had happened.
3)Russia and Ukraine blamed each other in the dispute that further ratcheted up
tensions ever since Moscow annexed Crimea in 2014 and threw its weight behind separatists
in eastern Ukraine with clandestine support, including troops and weapons.
4)“The United States expresses its deep concern over the incident in the Black Sea,” Pompeo said Monday.
“Reports that Russian vessels rammed and fired on the Ukrainian ships, injuring Ukrainian crewmen,
before seizing three vessels, represent a dangerous escalation and a violation of international law.”
5)Throwing his weight behind the measure, which is not guaranteed to pass, he said it
“in no way means that Ukraine will carry out any offensive actions”.
“I want to emphasize separately that we have all irrefutable evidence that this aggression,
this attack on the Ukrainian Navy’s warships was not a mistake, not an accident, but a deliberate action,”
Ukrainian President added.
6)US Secretary of State Mike Pompeo said the seizure of
Ukrainian ships was a “dangerous escalation and a violation of international law”.
President Donald Trump said: “We do not like what’s happening, either way, we don’t like what’s  happening and hopefully, they’ll get straight.”
Hope you liked it!!
THANK YOU!!