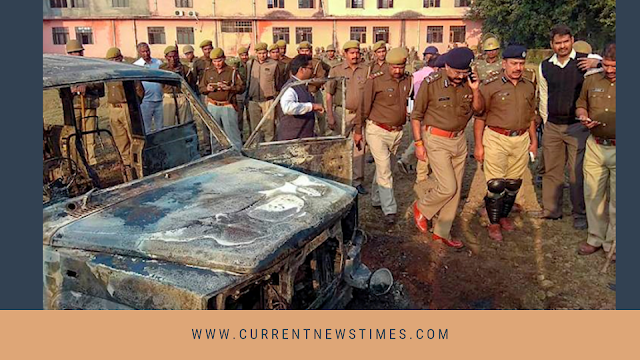 On 3 December, clashes occurred in Bulandshahr after cattle pieces were found in a field, which led to a protest by locals demanding the closure of all illegal animal slaughterhouse

Manish Mishra has been appointed as the Additional Superintendent of Police, Bulandshahr on Sunday. He replaced Raees Akhtar, who has now been transferred to PAC headquarters, Lucknow.
A mob of around 400 people, including right-wing activists, clashed with the police on December 3 in Siana area of Bulandshahr district,
after allegedly discovering cow carcasses thrown in a nearby jungle. The angry mob set fire to dozens of vehicles,
stone pelted and fired at police who then retaliated with gunfire.
Nine eyewitnesses, including two policemen, gave Current news Times India details on how the Bajrang Dal, an affiliate of the ruling Bharatiya Janata Party (BJP), supported the mob attack on a police outpost in Bulandshahr district of Uttar Pradesh, resulting in the death of a policeman and a civilian on 3 December.
Uttar Pradesh CM on Thursday met the family members of Inspector Subodh Kumar Singh who was killed in the Bulandshahr violence and assured them of justice and strict action against the culprits.
The chief minister met Singh’s wife and two sons at his Kalidas Marg residence here, a spokesman said.
A senior police officer privy to the investigations confirmed that one of the videos shows the army man, a local resident, firing but his involvement in the killings is yet to be ascertained.
The jawan is untraceable since the incident and the special task force and the Bulandshahr police team are searching for him, he added. His family members have told the police that she had come to his village on leave but had returned to his posting in Jammu.
Meanwhile, the sense of insecurity is reigning over the villagers,
where the incident took place. The villagers who repeatedly affirmed that their village had braved all the communal incidents like Babri Demolition violence Muzaffarnagar violence, etc.are now fearing their own safety, they are feeling insecure in the places where they have been living in peace
for decades.
PLEASE SHARE AS MUCH AS POSSIBLE:
Buland Shahar Riots; Updates, killings, illegal slaughterhouse.

THOUSANDS OF WOMEN FORCED INTO MARRIAGES IN CHINA.