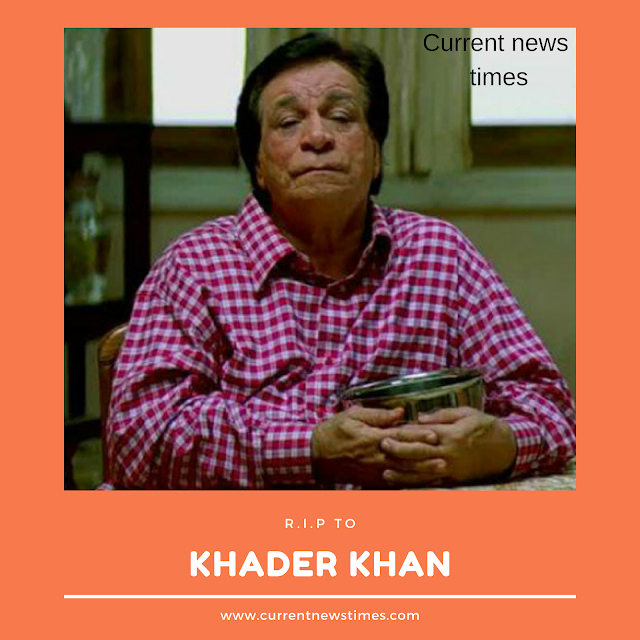 New Year Started with a sad note.
Veteran actor-writer Kader Khan passed away at a Toronto hospital on Monday, December 31.
He was 81. He was staying with his son daughter-in-law in Canada.

Kader Khan was first recognized for his writing skills.

Kader Khan was born to Abdul Rahman Khan and Iqbal Begum in Kabul, Afghanistan, on October 22, 1937.

His dialogues had struck a chord with masses and he was one of the rare writers to have worked in both the camps of Manmohan Desai and Prakash Mehra.

In 1972, Kader Khan was given the task of writing his life’s first script with Jawani Diwani (1972) starring Jaya Bhaduri and Randhir Kapoor.
Khan was a two-time recipient of the Filmfare Award for Best Dialogue for Meri Awaaz Suno (1982) and Angaar (1993).

Reportedly, Khan had been battling health issues for a long time. He was suffering from progressive supranuclear palsy which causes difficulty in walking and leads to loss of balance and dementia.
After undergoing knee surgery last year, he became wheelchair-ridden.

Khan had developed breathing issues and the doctors had reportedly transferred him from regular ventilator to BiPAP ventilator.

As per reports, he was suffering from Progressive Supranuclear Palsy, a degenerative disease that causes loss of balance, difficulty in walking and dementia.

A day after dismissing reports of his death, Kader Khan’s son Sarfaraz confirmed on Tuesday morning that the veteran actor-writer passed away on Monday evening.

Prime Minister Narendra tweeted, “Kader Khan Ji brightened the screen with his stupendous acting skills and lightened it thanks to his unique sense of humor.
National Film Archive of India (NFAI) also paid tributes to the actor.