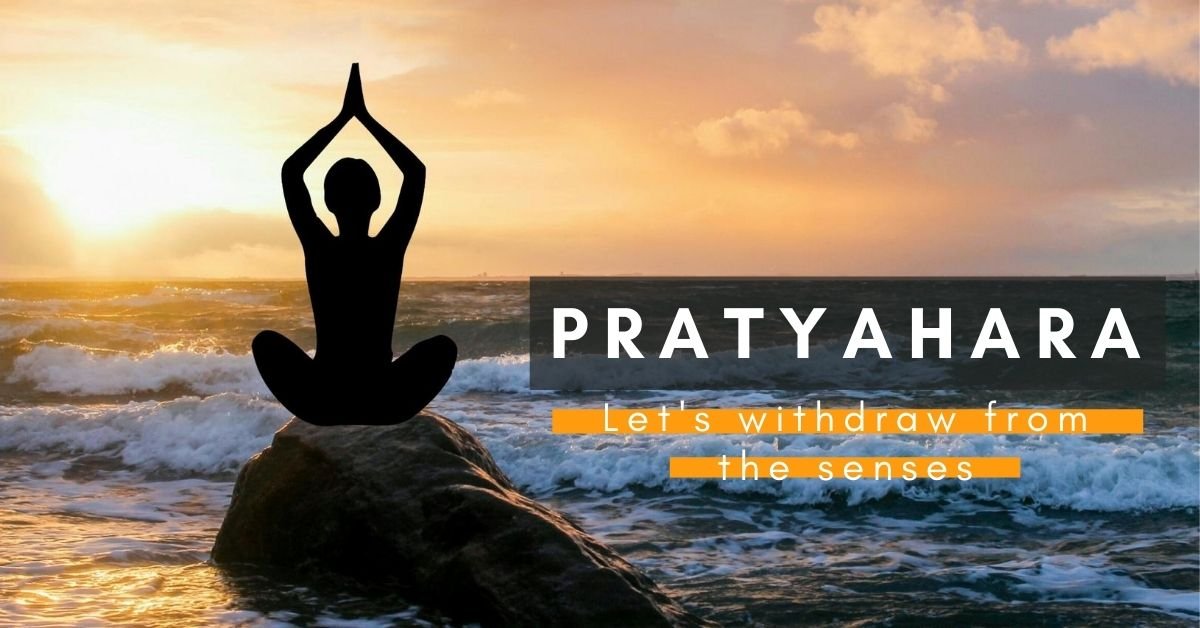 Pratyahara might as well be called the forgotten limb of yoga. Although, you might be practicing it more often than you’d think!

” Pratyahara means withdrawal of the senses, and you are practicing it throughout your whole yoga routine. “

Let’s take a closer look at the fifth limb of yoga, Pratyahara!

To start, the first four limbs are more extrinsic, but this one is intrinsic. Meaning that while the first limbs are quite visible for your environment, Pratyahara is a bit more personal, and people around you won’t notice a lot when you are practicing this limb.

Well, when you don’t listen to someone technically counts as pratyahara as well. In this case, the other person will know that you are practicing this limb. Although you probably won’t be getting any friendship points from them.

Of course, we can’t talk about this limb without talking about its founder: Patanjali.

Patanjali said about Pratyahara that we need to eliminate the sounds and sensations in our surroundings before we can even think about going into meditation.

During our day, we are exposing ourselves to many stimuli in our environment that restrict us from practicing the other limbs: Dharana (Concentration) and Dhyana (Meditation). Which is also preventing us from achieving our goal Samadhi.

Therefore, we must withdraw our senses, so that we can move on to the next limbs.

And this might be easier than you’d think, as within your yoga practice you’re actively tuning out to outside noise.

How To Practice Pratyahara Within Yoga ?

If you are going to classes, you’ll already be practicing Pratyahara automatically. Your teacher will include exercises like Centering at the beginning of your class. This is already a moment where you’ll be drawing your attention inside of yourself.

Savasana is also a great example of the withdrawal of the senses. Within this yoga pose, we are meant to go into deep meditation though. However, when you are first practicing yoga, chances are that you’ll be focusing on keeping the attention inwards, rather than listening to all the sounds around you.

And don’t get me wrong, even for advanced yogis, it can be quite challenging sometimes. Have you ever had someone snoring really loudly while you were in Savasana? It does tend to distract you quite a lot.

How To Practice Pratyahara Off the Mat ?

Also outside of your yoga practice, you can take your attention more into yourself. There are some easy things you can do to make sure that you’ve got your quiet time.

And it’s actually advisable to practice Pratyahara off the mat as well, as you’d like to hold on to this natural state of peace as long as you’d like.

One of the things you can do is to shut down all your devices every now and then. Even if it’s just for an hour!

In these modern days, it’s getting harder to be completely free of stimuli. We have phones, televisions, computers, etc. We are always ON-line. And therefore, we are always using all of our senses.

And when you are living in a big city, try to escape once in a while. And then I’m not talking about going for a walk in the city park. Get into the forest or go to a lake. Find some quiet time for yourself to practice pratyahara. Away from traffic, people and a lot of noise.

Alright, so that’s about it for Pratyahara. Now it’s time for me to withdraw my senses and enjoy being a bit OFF-line!

Virendra started his yoga journey 8 years ago and became a yoga teacher 2 years later. In the beginning, he started out his first vinyasa class and It was his starting of a whole new journey!

Since then he progressed a lot, done some courses, and after three years he became a yoga teacher.

He taught classes in several studios in Antwerp, Sint-Niklaas, and in his hometown Beveren and also shares his knowledge on his blog The Yogi Life for Me.

You can also see his previous contribution to these articles:-

See Other Limbs of Yoga